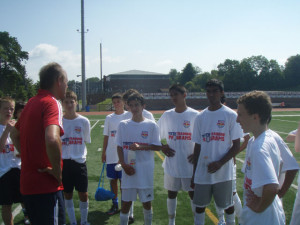 Coach Gary Pritchard is a Certified Mental Coach (CMC) who has dedicated his life to helping others improve their skills on and off the field. A former coach and public school teacher for Bayshore Junior & Senior High school in Bayshore, NY, Gary has coached various youth sports since 1975. He invested over 20 years as a Select and High School soccer coach, as well as an Assistant Coach at NCAA Division 2 Felician College.

Gary currently serves as the Golden Goal Program Director and as a coach and trainer for the New York Red Bulls Youth Camps. Gary has written or co-authored two powerful coaching books, including 105 Great Stories for Coaches, Teachers, Leaders, and Parents and 10 Things Great Coaches Know with Coach Mike Tully (click here for more information about these books).

Gary is on the panel of advisers for ParentalWisdom.Com which helps give parents help and advice on different issues with family and raising children. He is a member of the “World Positive Thinkers Club for his work with his “Thought of the Day” – a daily inspirational message which Gary emails to nearly 1000 subscribers.

Gary, I enjoyed meeting you and your program is excellent. Plan on us seeing you again next year to continue our sessions!

My U-14 girls went undefeated for the season and won the A flight this Fall. Our goals were set in August after Golden Goal and they stayed with it. A lot of credit goes to you as they repeated many o… END_OF_DOCUMENT_TOKEN_TO_BE_REPLACED

Coach Gary, Thank you for your continued professionalism and quality work. We do believe in the content of your message and appreciate in how it’s delivered to the players. The time players… END_OF_DOCUMENT_TOKEN_TO_BE_REPLACED

It was an honor to be able to be in presence of someone like Gary that can materialize ideas to a motivational facts to be used in our sport with our groups and in life in general. Our athletes and… END_OF_DOCUMENT_TOKEN_TO_BE_REPLACED

This year was a record breaking year for the program and it had a lot to do with our trip to golden goal and the sessions we had with you. I am very interested in having you come up to Northern Valley… END_OF_DOCUMENT_TOKEN_TO_BE_REPLACED

Gary…just to let you know, I have your book with me in Chile and have used it from time to time to relay stories or utilize quotes as we prepared and won the FIFA U20 World Cup…Well done.

Gary – I would like to thank you for the message you gave our young players.  Going out onto the field in the afternoon after our session with you, the attitude and demeanor of the boys was more focu… END_OF_DOCUMENT_TOKEN_TO_BE_REPLACED

I just wanted to thank you for presenting today’s teamwork seminar to us. It was enlightening and helpful. It brought up many areas and issues that we don’t think enough about and act on enough. Y… END_OF_DOCUMENT_TOKEN_TO_BE_REPLACED